Home Advice What is Viscosity and Why is it Important to Measure it?

Viscosity is a widely measured property and is critical in a wide range of industries and products. The rheological properties of a fluid are important for many reasons.

Newtonian fluids get their name from Sir Issac Newton. He described the flow behaviours of fluids with a linear relationship between shear stress [mPa] and shear rate [1/s]. This relationship is known as Newton's Law of Viscosity, where the proportionality constant η is the viscosity [mPa-s] of the fluid: Some examples of  Newtonian Fluids: Water, honey, alcohol, oil for these liquids only temperature affects viscosity.

Non-Newtonian fluids, therefore their viscosity is dependent on the shear rate (Shear Thinning or Thickening) or the deformation history (Thixotropic fluids). Non-Newtonian fluids display either a non-linear relation between shear stress and shear rate, have a yield stress, or viscosity that is dependent on time or deformation history or a combination of all the above. 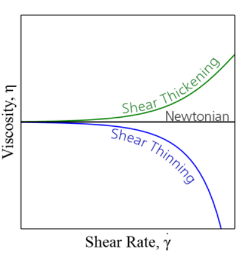 Some examples of non-Newtonian fluids: Cornflour and water, Ketchup, adhesives, creams both the speed of the spindle and temperature affect the viscosity.

Kinematic viscosity is the ratio of dynamic viscosity to density of the liquid. It is a measure of fluid’s resistance to shear flow under the weight of gravity. It's a measure of a fluid’s resistance to flow when no external forces except gravity are acting. It is most useful in describing Newtonian fluids. Centistokes (cSt) is the most common unit of measurement for kinematic viscosity. Centisokes equals 1 millimetre squared per second (mm²/s).

Dynamic viscosity is the measure of a fluid’s resistance to shear flow when an external force is applied. It is useful for describing the behaviour of fluids under stress. Mainly, it is most useful in describing non-Newtonian fluids by observing how viscosity changes as the shear velocity changes.

How is viscosity measured?

There are two main types of viscometer and methods of classifying the rheological properties of the liquid. The main types are listed below; Within these types, there are many subtypes and methods.

These are the most simple of instruments for viscosity measurement. A set volume of liquid is passed through an orifice of known size, the time taken for this liquid is measured and (efflux time) is then calculated into a kinematic viscosities unit of measurement such as centistokes (cSt). Glass Capillary Viscometers and Flow Cups come in many types all manufactured to different standards.

Rotational viscometers work by measuring the torque created by the shaft and spindle.

Like the capillary viscometers, there are several types of rotational viscometer with many different spindle sizes and shapes suitable for just about any fluid viscosity measurement. At AML, we offer a wide range of viscosity calibration repair services and viscosity test equipment, to include Melt Flox Index and Flow Cups.