Get a Quote
Demo Video Ask a Question Data Sheet

Please fill in the form and a member of the team will be in touch. 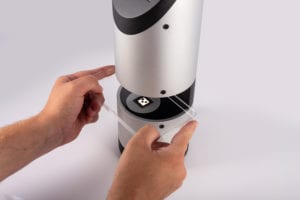 How does the the Rhopoint ID work?

The cloudy, “hazy” appearance of transparent materials is an important attribute that determines their suitability for applications. For example, packaging materials are typically required to be maximally transparent in order to reproduce the vivid colours and finer details of the product, while for cosmetics a high opacity may be desired. The conventional methods for quantifying the appearance of transparent materials typically employ a dedicated “haze-meter” instrument configured to quantify the amount of light scattered over a certain range of angles from the direction of the incident beam.

Although long-established, this test method suffers from a number of weaknesses. First, being based on an arbitrary range of scattering angles, the definition of “haze” does not correlate directly to the human perception of transparency. Second, the “haze” metric completely fails to capture the variation of a material’s transparency with the separation distance between said material and the viewed object – an important feature for packaging materials which specifically target contact or non-contact applications. Finally, a typical instrument outputs a single value averaged over a large, ~5 cm2 specimen area which limits its effectiveness as an optical quality control tool for detecting local defects.

Rhopoint ID addresses all of the issues above and quantifies the loss of transparency as Illumination Diffusion (ID), precisely capturing the visual effects of diffuse scattering of illumination light as it passes through a material. Based on an imaging method, it is configured to specifically match the human perception of transparency. The instrument outputs in-contact optical properties, as well as their variation with specimen-to-object separation distance, while on-demand probing local or spatially-averaged specimen areas.

A backlit, high accuracy, reference target graticule functions as the viewed object, creating a highly defined pattern of light intensities with optimally sharp transitions between the backlit and masked areas.

A sample placed in direct contact (or at the desired separation) with the graticule is photographically imaged, with image analysis then used to quantify the reduction in sharpness of the backlit-to-masked (i.e., light-to-dark) transitions of the graticule compared with its reference image.

The output is a simple single-scale ID value, with the overall scale specifically matching the resolution of a human eye at a typical viewing distance.

What does the Rhopoint ID measure?

Contact appearance – A direct measurement of the appearance of an object viewed through an in contact material.

Non-contact appearance – A measurement of the appearance of an object viewed through a material with an air gap or spacing between the two.

The relationship between contact and non-contact appearance cannot be assessed by current haze and clarity instrumentation. Haze and clarity values measured with other instruments are impossible to directly relate to the visibility of an object viewed through the material in contact or at any specific distance. 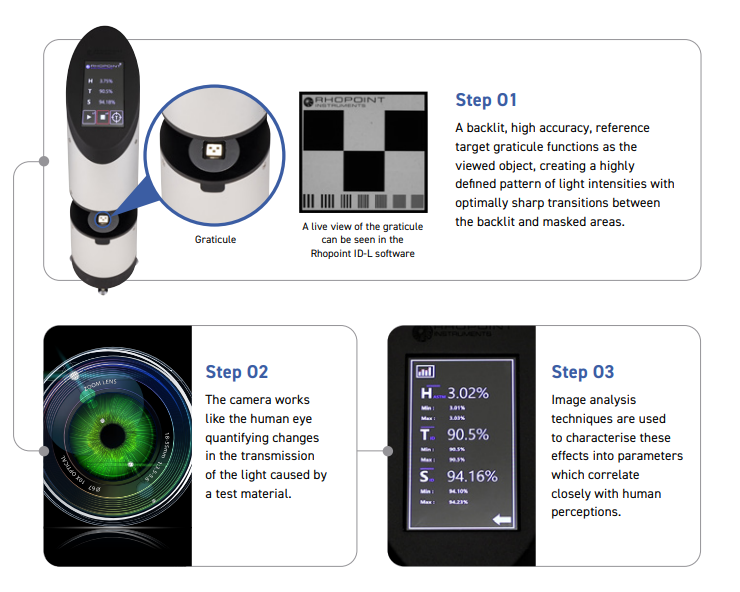 As plastic packaging is used both in contact and with air gaps between the product and protective film, the new ID measurement is a significant step forward for this industry sector when developing or specifying films for different applications.

The following examples show the relationship between air gap size and appearance for a number of different polymer films.
ID values are measured on the Rhopoint ID using spacers to replicate the air gap between the product and material in the final application.

Using this method the ID provides a single scale to evaluate appearance at any distance from in- contact and with up to 40mm air gap.

The ID-L variant additionally provides statistical analysis of results as well as images of the test graticule that can be visually assessed and used in reports outlining material characteristics.

By using the Rhopoint ID, the packaging technologist can choose and specify a protective film that performs best for their application in a way that correlates precisely to the eye of the consumer. 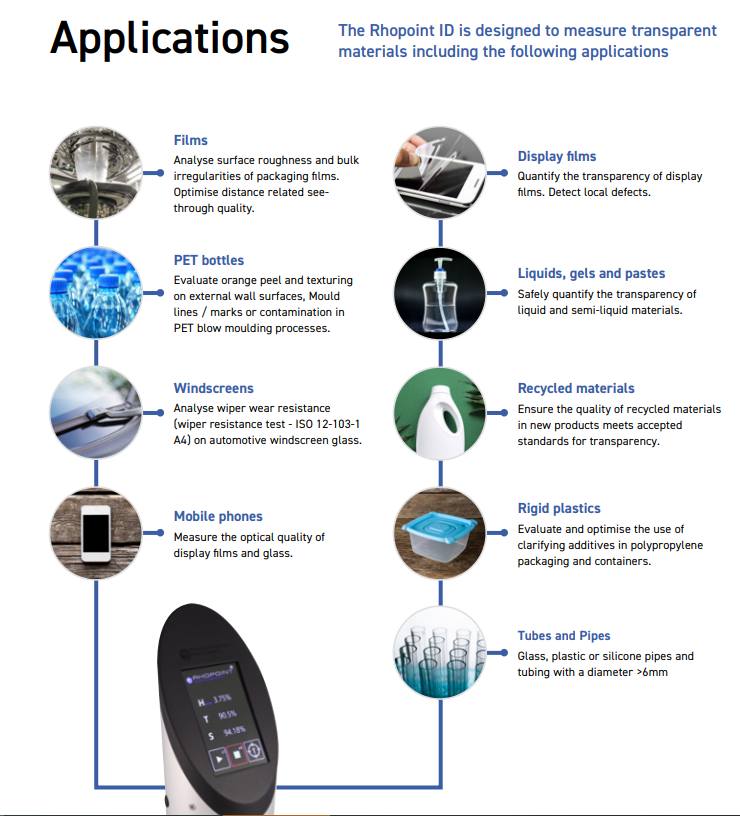 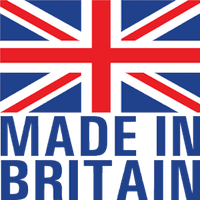