Home Advice What is Temperature Measurement?

How is temperature measured?

There are a large number of different types of temperature sensors and thermometers, below is a description of the most common types found in industry and laboratories.

Thermocouples are one of the most commonly used temperature sensors. They are found in a wide range of industries and applications.

How do thermocouples work?

There are many types of thermocouple commercially available. They all have particular properties that make them more suitable for certain environmental conditions, temperature ranges and accuracy requirements. The type is identified by the letter it is given e.g. Type K. The colour of the wires are specified by the International Electrotechnical Commission (IEC) and other international standards so that they can be easily identified when in the field. For example, according to the IEC requirements; Type K have a green outer sheaf, a white negative leg and a green positive leg. We will discuss the most common types found in the industry. These are types K, J, T & N.

Type J Thermocouples are also widely used. They cost a little less than Type K but have a reduced working range and when used below ambient temperature are susceptible to corrosion of the iron leg. Type J can be used in a reducing atmosphere which most other thermocouples can’t. 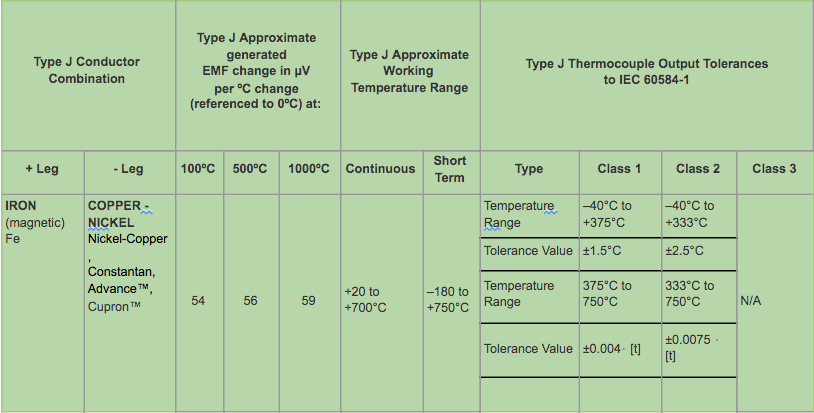 Type T Thermocouples originally were called Copper-Constantan. These are ideal for low-temperature measurements and are widely used in laboratories for the temperature range -200°C to + 400°C Type T’s also have excellent repeatability of +/- 0.1°C

Like thermocouples these come in many different types and manufactured to different standards, we will discuss how these work and a couple of the most common types. The basic model of operation. As the temperature increases or decreases the resistance changes of the measuring sensor.

The most common type of RTD is the Platinum Resistance Thermometers PT100. The PT100 has a resistance of 100 ohms at 0°C hence its name. Its resistance changes by 0.392 Ohms for every degree centigrade change in temperature. The advantages of the PT100 vs a thermocouple is for lower temperature applications it is greatly more accurate. A typical working range for a PT100 is -200 to 800°C, the actual range is dependent on the type of RTD probe and manufacturers recommendations and specifications should be followed carefully. RTD’s do not require compensation cables and in theory, any cabling can be used, they also don’t require a cold junction measurement to calculate the actual temperature. The disadvantages of a PT100 is that it is more expensive. Long cable runs need to be avoided and it might be necessary to use a transmitter over longer runs.

One of the other drawbacks of RTD’s is the resistance in the leads connecting it to the temperature indicator will introduce an error. To overcome this, the most basic set up of two wires can have either a 3rd or 4th wire added to the circuit to help elevate the resistance in the other leads. 3 wire RTD’s are very common in industrial applications and 4 wire is reserved for high accuracy application mainly in laboratories and calibration laboratories. The 3 or 4 wire set up is more expensive than the 2 wire for two reasons the sensor is more expensive and you will need additional cabling for the 3rd or 4th wire. Two wire RTD connection: 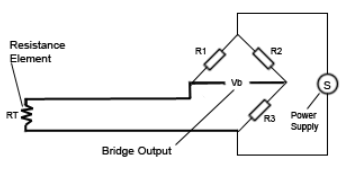 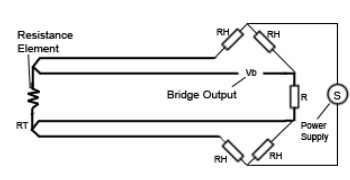